skip to main | skip to sidebar

Memories of The Martyrs: From Myrtle Beach to Mrs. O'S 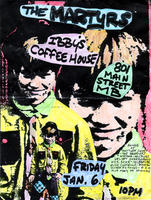 Chris: "So wait, is this a practice? Why don't we fuckin do it?"
Mike: "Cause it sounds good with the violin. But..."
Paul: "Well, then lets do it with the violin."
Mike: "But we wanna see what it sounds like with the mandolin."
Chris: "We just heard, he doesn't like it"
Mike: "Goddamnit"
Chris: "it's not fuckin brain surgery. He just said he doesn't like the sound of it, just play the God damn violin, It's like fuckin retard zoo."
Paul: (laughing) "Retard Zoo? An idea for a song."

Ah, they all have their unique style but it's difficult to keep them all apart. The Martyrs, The Feebs, The Frustrations, The Throats, The Witner Twins, Pizazz, The Sleeping Brothers. Alright, so they all begin with "The"... well except for Pizazz...dunno where I was going with that one. But to me the Martyrs are like listening to the Breeders or Frank Black & the Catholics, yeah they're good, but I missed something.

Like most of you reading this, I again wasn't there when they began, or for a very long time after. I was introduced through the live shows by the Witner Twins at a local(ish) coffee shop in Myrtle Beach, North Carolina.

An Irish guy living in Carolina in 95, I was introduced to ex-Martyrs Paul Saur and Mike O'Shaughnessy as "You've got weird music taste, so've these guys." Yeah so the introducers didn't have any taste but they introduced me to music that I loved instantly. These were the guys I shoulda grown up with. These were the guys who actually got in their basement and recorded the songs they had rattling round their head.

I took the opportunity to go on a road trip to They Might Be Giants who played about 2 hours away from where we lived...the way Mike drove anyway. The tape deck was rocking the tunes of the Martyrs most of the way. A couple songs still stand out today: "But Until Then" and "Little Chinese Boy". I couldn't wait for more. The lads were shy about sharing their Martyrs stuff so I had to wait for the occasional acoustic gig to hear some Martyrs.

Then came the open mics in the coffee shop. I still remember these gigs. Just because as an under-21 year old (even an Irish one) I couldn't get a drink in Carolina to save me life, so this was my only fun outside of TV and the Internet. So every once in a while I'd get to go see a band who played my kind of music in a town where everyone's kind of music was either Country and/or Western. A couple memories stand out. A couple of fantastic songs by the boys (they work well with acoustic guitar and a voice). An excellent cover of "Here Comes The Regular" (the irony of this song about drowning your sorrows being sung in a coffee shop was lost on me completely). But mainly one night when an accident happened just outside the front door of the coffee shop and with ambulance lights flashing in the window, Paul starts up a version of "Driving on the Freeway." Just classically insensitive and hilarious.

So it didn't last long, only two years in the states, but I did get the amazing opportunity of seeing all four members playing together for what Paul and Jimmy have just decreed will be the last ever time
Posted by The O'Shaughnessys at 10:25 PM

wow. reading that was the first time i've ever felt like a real musician. thanks derek.oh, and i never heard that story about paul and "driving on the freeway". fucking hilarious! it made me remember why i don't completely hate paul!
one thing: is that really me involved in the mandolin/violin exchange? i thought it was all mike and chris. could be wrong. i drank alot.
thanks again derek, keep spreading the word.
-jim, drummer

that "mr. silly pants" was such a nice song, and i told him he should do something with it. the tape paul gave me had the song cut off at the end so i dont know if he took out something dirty
that he didnt want me to hear...
from his mother in NC whos moving and what should i do with all this crap here??????

and to that mike, two words:
Jesu swept